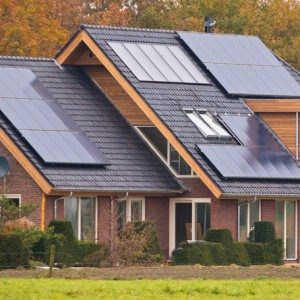 As the price of solar panels has dropped, solar power installations have grown in demand and have become more readily available to the public. The most common installations are, household photovoltaic (PV) systems, generally installed on rooftops or along the side of the house. However, as demand increases and more solar technologies enter the market, we are beginning to see more creative uses of solar panels. Here are a few examples that are expanding how we think about solar energy.

A recently constructed housing development in Chiang Mai, Thailand, uses solar panels to power four family homes in the Phi Suea House development. The system is unique because it is the first known installation to use solar-powered hydrogen to store excess energy for use at night. The system will eventually generate about 441 kilowatt-hours of electricity during the day, and the excess energy will be stored in two lead-acid battery banks. The energy will be converted to hydrogen gas by an electrolyzer that applies an electrical current to water. The energy will be stored as gas and reconverted into electricity by fuel cells when the homes need more energy. This project is helping to expand how we think about energy storage, and is designed to be as ecologically friendly as possible; the only reported by-products of the system are oxygen and water.

Sporting events are far from carbon-neutral events, but some clubs around the world are trying to reduce their carbon footprint by developing solar-powered stadiums. The most impressive example comes from Taiwan, where the Dragon Stadium is powered completely by solar panels. The Dragon Stadium is a 40,000-seat facility that was built in 2009 for the World Games. It contains almost 9,000 rooftop solar panels, which generate enough power for over 3,000 lights and two giant screens. In the U.S., AT&T Park, home of baseball’s San Francisco Giants, has a 120-kilowatt array that powers the massive scoreboard in the outfield. The installation generates enough energy to light 40 family homes.

The sun has been a source of wonder and inspiration to humanity for centuries, and the recent developments in solar energy are driving a new wave of solar-inspired art. The first example also comes from the sports world. When the Washington, D.C., football team installed solar panels on the parking structures and main entrance at FedEx Field, they also installed a 30-foot “Solar Man” statue outside the stadium. Solar Man, primed and ready to throw the football, is constructed from thin-film solar panels that generate electricity for the stadium. The artist Sarah Hall has embraced another creative use of PV panels. Ms. Hall takes two panes of stained glass in a variety of textures, colors, and patterns, and installs a PV cell between the two panes. These windows can be fitted to any frame and the fun, colorful windows generate solar energy for the building they’re installed in.