Using Roads To Harness Solar Energy Will Soon Be A Reality

Written by goldensolar on May 18, 2015. Posted in Solar Power. Leave a Comment 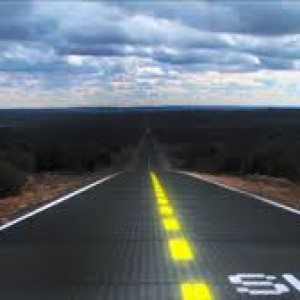 There are about 37.5 million miles (60 million kilometers) of roads in the world that are used for nothing other than road transport. However, adapting these expensive surfaces for other things such as to harness solar energy has proven to be quite expensive and difficult. Some of the past attempts include converting vibrations on busy roadways into electricity. However, this unique innovation is only economically viable on some of the busiest roads which account for a very small fraction of the world’s vast road network. Another technology captures and stores the heat energy on roads during summer and supply it trough roads during the cold weather in order to keep roads free from ice. Japan has even established a working test patch of this technology in Hiroshima. The unique idea that has gained massive popularity and traction in the recent past is embedding solar cells on the roads. The Solar Roadways project was launched by an American couple in 2014 and it managed to collect more than $2 million on Indiegogo which is a crowdfunding site. However, the Consortium SolaRoad which is based in Netherlands is closer to reality because it has been operating a 230 foot (70 meter) cycle path that can generate enough electricity for at least two households. This unique system was up and running by November 2014 and the field testing results over a period of six months are positive. The project has actually been generating more electricity than had been predicted in the SolaRoad laboratories. How does this principle work? The system uses photovoltaic cells are supported by concrete and rubber at the bottom and protected by strong glass on the top. Besides letting light through, the glass has properties that are similar to concrete or asphalt; it is glare free, skid resistant and very durable. These units are connected to a central system that generates electricity and feeds it to the grid. SolaRoad claims that even a 12 ton truck could ride safely over the road. However, the company has only tested 150,000 cycles so far. Although the road has some minor chippings, the project has continued to work smoothly without any major shortcomings. Therefore, the next step is to use the system in highways or more roads in local councils. The economic case for SolaRoad’s business is the main reason why it stands out from competitors. The four companies that are involved in the consortium project complement each other very well. The public-private association has invested over $4 million in this project. This includes cost for building test roads and commitment to scaling up. The unique selling point of this group is not only the innovation of its main technologies but also the ability to manufacture the solar panels in bulk. The other strength of this consortium is its focus. Besides harnessing solar energy, the American Solar Roadways Project also wants to use the solar panels to provide heat and lighting for the roads where they will be installed. The main goal of SolaRoad is to build roads that can last for at least 20 years. The company says that the extra cost incurred when compared to concrete or asphalt roads will be recovered using the electricity generated within the first 15 years. Therefore, the extra revenue that will be generated in the last 5 years will only make the solar powered roads feasible.