Can Google Bring Solar Electricity To The Masses ?

Written by goldensolar on March 23, 2015. Posted in Solar Power. Leave a Comment

Solar-generated electricity pollutes neither air nor water. Solar energy does also not result in emission of dangerous carbon dioxide, which causes adverse climate change, except during the making of the solar panels. A solar panel’s land use impact is practically nonexistent since they are placed on roofs. Additionally, solar power creates more jobs per unit of energy than energy generated using fossil fuels, and the these jobs cannot be outsourced since construction of such power systems is done locally. The use of solar energy also results in consumption of less water than say, coal, natural gas, and nuclear energy, which means it does not put a strain on community resources. But, as great as solar energy may sound, there is a major obstacle to its widespread uptake – cost. A solar energy system can cost over $10,000 a unit, something just a few lucky Americans can manage to pay, even through borrowing. 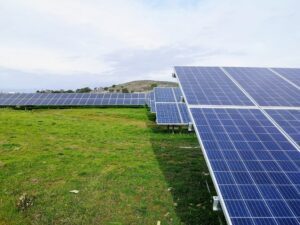 Here is where the fund created by SolarCity and Google might help. Of the $700 million SolarCity-Google fund, Google has provided $300 million. The fund is aimed at helping people overcome the prohibitive upfront costs of setting up solar power systems, something that should boost rooftop solar accessibility for lower-middle and upper-middle classes. SolarCity’s VP, Jonathan Bass, has termed the project as a democratization of access to solar energy. Nevertheless, this type of deal is not the first of its kind. There have been solar leases and power purchase agreements, which are slightly different to what SolarCity and Google are offering. However, they also try to solve the problem of the prohibitive upfront costs that are reducing access to solar power. Under these earlier deals, the customer only has to handle the monthly power costs, with the option to purchase the system later if they so desire. The SolarCity and Google fund will offer these aspects, but with a twist. Essentially, the two partners seek to subvert the notion that green energy is more costly than traditional energy. So, in addition to the fund distribution being affected by things like sunlight exposure, it will also take into consideration local cost of retail electricity, which varies from place to place. SolarCity does not have the ability to make the ubiquitously available, although they are operating in 14 states and estimate that they can get to 25,000 new households and add new energy capacity of 500 MW. This will be a big boost to the 190,000 customers and 1,000 MW the company had achieved at the close of 2014. According to the VP, the appeal for users of solar energy under SolarCity’s deal comes from the homeowners being able to pay less for solar energy than they did for traditional power while at the same time avoiding the crippling upfront costs. Essentially, these are customers who are happy to save about $20 to $40 a month, which can add up to thousands of dollars over time. A similar project by California Solar Initiative, launched in 2007, boosted the uptake of rooftop solar for homeowners by up to over 400%. Unfortunately, there is a limit as to how far down the income ladder these solar deals can extend without compromising on ethics and sustainability. This is considering that predatory lenders and rent-to-own furniture businesses have in the past enticed the poor into entering into ill-advised deals that ultimately caused them financial turmoil. Although this is one area where this kind of deal can go sour, so far, the Google-SolarCity partnership is doing great. The two have even managed to lower the prerequisite credit score to just 650, though its not clear if they can go any lower. Mr. Bass says that defaults are extremely rare, possibly because giving someone a chance to spend less on energy does not create the motivation to make payment defaults, since this would mean having to pay more for regular power. Furthermore, at lower income levels, most people rent apartments and homes rather than buying them. This means that SolarCity has to deal with the building owner, which is an entirely different ballgame. Therefore, the deals are affected to a large degree by homeownership. Granted, these kinds of deals help improve access of essential goods and services to lower income Americans. But, they can only do so much. Ultimately, there can be no substitute to policy change if access is to be improved for everyone. Policy helps empower everybody, especially at the lower income levels, where the increase in purchasing power is most needed. The truth of this fact is undeniable, regardless of whether you purpose to help everyone achieve their “American dream” as pertains to home ownership, or make green energy the prime mover for the entire economy, and so so forth.