Written by goldensolar on December 21, 2015. Posted in Solar Power. Leave a Comment 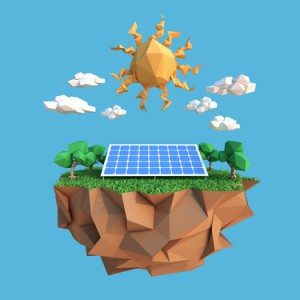 A new report from GTM Research estimates that 2015 will be a banner year for solar power in the United States. The report is based on a strong third quarter of this year that saw 1,261 megawatts (MW) of solar power installed across the country. The report also predicts that the fourth quarter of 2015 will also show strong growth in solar power installations, and estimates that over 3 gigawatts (GW) of new capacity could be installed. Should reality follow these predictions, it would bring the total installed capacity close to 7.4 GW for the entire year. Last year was also a strong year for solar with 6.2 GW of installed solar capacity, but the estimates for 2015 would eclipse the 2014 installed capacity by 19%. The GTM Research report also predicts even stronger growth in 2016. The Solar Investment Tax Credit (ITC) was extended by Congress in 2008 and provides certainty for the solar industry. The tax credit is a crucial subsidy that provides a 30 percent tax credit for solar power on distributed generation, or installations on residential and commercial buildings. Unfortunately, the ITC is set to expire at the end of 2016. While this is a source of concern for the solar industry, it also means that 2016 will be a very strong year for solar. According to GTM Research, there is roughly 15.4 GW of new capacity set to come online next year. If this prediction comes to fruition, it will more than double the growth experienced in 2015. Another encouraging bit of news from the report is that this growth is being driven by an increase in residential solar installations. Residential installments are growing more quickly than non-residential and utility-scale installments. The increase in residential installments is encouraging from both an environmental and economic perspective because it will reduce the need for utility-scale projects that require more land and increase the potential for conflict with other land uses. This report shows that the growth trend in solar power since 2008 is not slowing down. On average, the cost of solar panels fell 75 percent between 2009 and 2014, and some estimates predict it will drop another 25 percent by 2018. This boom has generated enough electricity to power 4.6 million American homes, a number which is only going to keep rising as more solar power is added. All of this growth has been accompanied by the continual decrease in the cost of solar energy. For utility-scale solar, the cost of power has dropped almost 60 percent since 2008. The cost of residential and commercial installations has also decreased, one of the major reasons residential and commercial solar has continued to increase year after year. All told, there is a bright outlook for renewable energy in the U.S.