Written by goldensolar on December 14, 2015. Posted in Solar Power. Leave a Comment 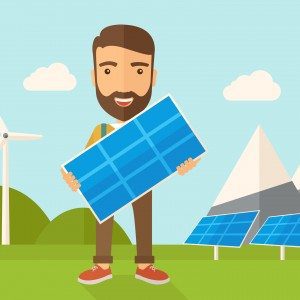 Since 2008, the cost of solar power has consistently fallen every year while the amount of capacity installed grows year-over-year. Much of this growth has been through small-scale solar, photovoltaic (PV) systems on residential and commercial properties. However, this short time period has also seen impressive improvements in utility-scale solar power. Utility-scale solar is a crucial for attaining our carbon dioxide emissions goals, but is less well-known than its rooftop cousin. Here is a brief primer on utility-scale solar and solar power plants. Utility-scale solar power plants can take the form of several different technologies: concentrating solar power (CSP), PV systems, and concentrating photovoltaic technology (CPV). All of these technologies generate clean energy at much greater scales than typical PV installations, and the electricity is sold to wholesale buyers, not the end-users. This setup is more similar to other public utilities that generate electricity from natural gas or coal than PV systems on residential or commercial properties. There are a few different CSP technologies in use, which all consist of mirrors that reflect and concentrate sunlight on central pipes filled with a transfer fluid, typically synthetic oil or liquid hydrogen. When the fluid is heated to a certain temperature, it generates steam that turns a turbine that creates electricity. There are three common types of CSP plants: parabolic troughs, compact linear fresnel reflectors (CLFR), and power towers. A parabolic trough consists of concave mirrors that direct reflected sunlight onto a central fluid pipe, which transports the heated transfer fluid. Similarly, CLFR systems also use curved-mirror trough technology, but the reflected energy is focused onto an elevated receiver consisting of tubes transporting flowing water. The power tower approach uses a central receiving system atop a tall tower that captures the reflected energy from computer-controlled flat mirrors that track the sun.

Photovoltaic solar plants operate similarly to residential PV systems, but are constructed at a much larger scale. PV panels are constructed from semiconducting materials, often silicon, that absorb solar energy and separate the electrons from sunlight and redirect them into an electrical current. These PV plants often require large tracts of land that are not always available, but the cost of PV technology continues to fall, making large PV plants a more economical solution than its peers. The last type of utility-scale solar is not yet implemented at the scale of the other two, but is considered a viable alternative to CSP plants. Concentrating photovoltaic technology also uses lenses or mirrors to concentrate sunlight, but differs from CSP because the sunlight is redirected onto high-efficiency solar cells. These cells are similar to PV cells, but are more concentrated. This decreases the required cell surface area and increases the efficiency of the panels. Unfortunately, they are also more expensive at this stage. All of these utility-scale solar technologies represent exciting alternatives to fossil fuels. With each passing year the technology improves, the price drops, and more clean energy enters the transmission grid.