Written by goldensolar on April 25, 2016. Posted in Solar Power. 2 Comments 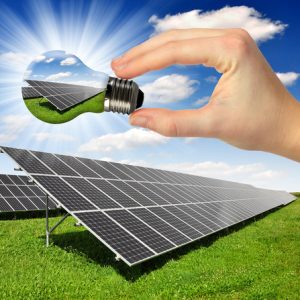 Sunlight is free and it is the most reusable, sustainable and cleanest power source on our planet. Solar energy has been around for about 4.7 billion years. We have now learned to harness the power of the sun with photovoltaic cells that can power homes and even aircraft.

1. The earth receives 1,366 watts of solar energy per square meter everyday. About 30% is reflected back but the rest of it is absorbed by the planet. 2. The total amount of solar energy absorbed by the earth in a year is approximately 8,000 times more than the total consumption of energy world-wide. This is 40,000 times greater than the amount of energy used annually in the United States. 3. NASA has experimented with unmanned solar powered aircraft for over 30 years. The Pathfinder Plus and Helios Prototype are examples. 4. The world’s largest solar power plant is located on 1,000 acres in California’s Mojave Desert. 5. Solar power can be passive in just supplying warmth and light. Windows are passive solar systems allowing light and energy into a room. Shutters, shades, blinds and curtains are designed to control the amount of sunlight coming in through a window as well as to provide privacy. Tinted windows are used to limit harmful ultraviolet rays. Greenhouses and conservatories use a passive solar system for light and warmth. They usually have windows on three sides to bring in light. 6. The sun’s energy comes from nuclear fusion. This is the combining of atoms rather that splitting them as in nuclear fission. (Nuclear fission is used for reactors and weapons.) Science is working on ways to harness nuclear fusion as the ultimate energy source without creating any destructive elements. Hydrogen extracted from seawater using a nuclear fusion process can supply more energy than fossil fuel. 7. Solar panels contain photovoltaic cells that use semiconductor materials that attract sunlight. When the sun hits the cells, electrons are released from their atoms. The electrons flow through the cells providing energy. 8. Solar panels have a lifespan of 25 to 30 years making them an outstanding investment for homes and commercial buildings. 9. Homeowners using solar panels spend approximately $1,200 less on electrical costs each year. This is an average based on the location of residences. Power that is not used in the residence is contributed to the the public grid system. Solar power users receive credits for their contributions. 10. Solar power does not work at night but the energy can be stored in batteries. The stored energy can be used after dark or on cloudy days when the solar cells receive less sunlight. Special quinone-based flow batteries are in the experimental stage as a better means of storing solar energy. Thermal storage tanks are another new development for energy storage. Future technology will improve our ability to use the sun’s unlimited energy.